Balfour Infants School’s Year 2 Dance Club have worked spectacularly hard this year to choreograph, tie together and rehearse for their Year 2 performance, a tradition at the school. The dancers have all been a pleasure to work with. They all performed beautifully and should be very proud of themselves.

The dance was choreographed by the dancers and myself over the past two years. They are a creative bunch, full of energy and ideas! The dancers chose their favourite bits and I mixed the songs together for them so we could perform them all! Four of the dancers joined us part way through this year and so didn’t know a lot of the material. They set their mind to it and, by the performance, you couldn’t tell the difference between them and any of the others so well done them!

This was the group’s second performance. The first was at The Rats Bay Shindig in April 2014. They performed ‘The Upside Down Dance’. Some of that dance was included in the final performance. The dancers were fantastic at the shindig as well. You can read more about that HERE.

I also teach a Year 1 Dance Club at Balfour Infants School. I asked the group what they thought of the performance and here are some comments I received from them.

‘The show was fantastic because the year 2s kept practising and they were really good at it.’
Willow

‘I liked the Happy dance that they did in it and they mixed it all together.’
Rubi

‘It was fantastic because it just was. My favourite bit was probably the bit when they looked like an egg at the start and then they grew into something.’
Ella

So, what you’ve been waiting for! Here’s the video…

Lorraine went to St Nicholas Infants School today to lead some cross-curricular dance workshops with a Maths and Dance theme! Here are some of the things the participants and their teachers said about the classes.

Comments from Class 1 (Year 2) after their Maths and Dance class
‘I liked my group doing the turn.’
‘Liked it all, was a good thinking game and fun as well.’
‘Liked going round circle saying names and going fast.’
‘Liked group balancing and turning.’
‘Great warm-up [think they mean the games as we didn’t do a normal warm-up’

‘That was brilliant! The children loved it. Was great to see how easily they could learn a sequence in a group, without pressure. We will use the station idea in our next session [country dancing].’
Year 2 Teacher, St Nicholas Infants School, June 2014

Comments from Class 2 (Year 1/2) after their Maths and Dance class
‘Enjoyed the jumps.’
‘Liked all of it. Liked watching group doing the snake move.’
‘Liked making shaped and ‘can you’ game.’
‘Wonderful. It was really fun. Especially spaghetti and meat balls [from the ‘can you’ game]’
‘I liked the station moves.’

‘I loved watching my class working as a team, and without speaking!’
Year 1/2 Teacher, St Nicholas Infants School, June 2014

Last term I worked with Year 3 at Miers Court Primary School on a cross-curricular dance project designed to enhance the pupils’ learning.

The Plan
Each year group in the school has a different theme to focus on each term. Last term, the theme for Year 3 was Mighty Metals so, using a cross-curricular approach, we explored magnets, metals, forces and movement. The Process
We began by watching Honda Cog, a fantastic video that shows how parts of a car come together in an unusual way to make a car start. From this we got lots of ideas for words that describe movements. There were six groups and they each created their own production line, passing their group’s chosen object down the line of people in an unusual and interesting way. After a few sessions we ended up joining all the groups together to make one, very long production line. It was very impressive and all the dancers did so well to keep going throughout the long dance. One class even came up with a plan to make a robot!

The Performance
There were four weeks to get ready, on the fifth week was the performance! The year 3 classes performed to each other, to the year 5 classes and to staff who included the Deputy Headteacher!

The rehearsal on the day was tense and very busy. At the last-minute a robot dance, choreographed by everyone in each class together, was added for a spectacular ending.

The audience arrived and were asked to sit right in the middle of the hall, very unusual some said. It worked perfectly for the performance though, the audience were surrounded by the robot production line and then, towards the end, the robots came towards them, dancing, before collapsing to the floor, all tired from the hard work!

The Video
We were very lucky because Clare, The Right Step’s Social Media Guru was able to join us to film and take photos. You can find the photos in our gallery or on Pinterest, http://www.pinterest.com/therightstep/mighty-metals/ 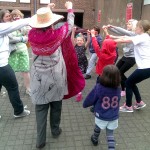